Chuck Steak – We have started experimenting with dry-aging the centre muscle of the chuck. This muscle is the continuation of the sirloin and the forerib of the beef, heading forward into the shoulder of the carcase where it progressively does more work.

This often just became part of the general stewing and mincing meat on an animal. However, from a well marbled, well finished, grass fed animal, the centre-cut of the chuck becomes a steak of the most magnificent flavour and deep ruby colour. The dry aging allows a softening of the proteins in the meat, adding to the taste.

The heavy fat marbling maintains the luscious moisture in the meat as it cooks. The chuck steak will never be as tender as a filet steak. There is texture. There is also flavour off the scale. It is also worth considering a well-hung chuck centre rolled as a roasting joint. 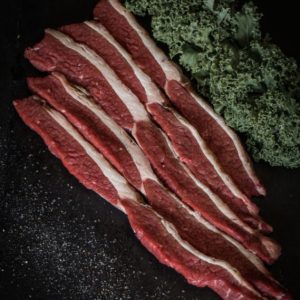